The Mechai Patana School, also known as The Bamboo School, in Buriram in the North-east of Thailand is an amazing place for learning and community engagement.  In fact Khun Mechai Viravaidya, the founder of the school, likes to refer to the school as a 7Eleven – a ‘hub’ for the community that is open 24 hours a day, 7 days a week and 365 days a year.  Khun Mechai has never done things by halves and is one of the leading social entrepreneurs and innovators of education in Thailand today.  Many people knew of Khun Mechai as ‘Mr. Condom,’ the man who spoke out in the 80’s and 90’s about the imminent threat of HIV/AIDS to Thailand and travelled the country promoting the use of contraception and using his ability to use humour and wit to get the message across to the (especially rural) Thai people.  He has rightfully been recognised with numerous awards and global positions for his work on population, development and HIV/AIDS issues as you can see in his short biography below.* 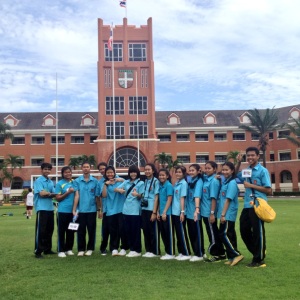 Today, though, he is still working hard for the rural disadvantaged and believes education is the key factor to bringing better opportunities and equality to rural communities and the people.  The Bamboo School is a unique and holistic approach to education within a typically rote learning based Thai education system.  His model gives young rural people the chance to learn life skills and the confidence to use them to be successful in life – not just for themselves but also for their families and their communities, ultimately preventing the educated from migrating to the urban centres such as Bangkok.  The Mechai Patana students engage in service learning, work experience, social enterprise initiatives, the interviewing and recruitment of their teachers, financial responsibility, creativity, sustainable thinking and action, etc.  They really are amazing global citizens who are independent learners and succeeding academically.  Khun Mechai has recently formed a partnership with a prestigious Thai university that has recognised that the MPS students are equipped with the learning skills and values to be successful in tertiary education and beyond and has agreed to offer places to every student that graduates from the Bamboo School. 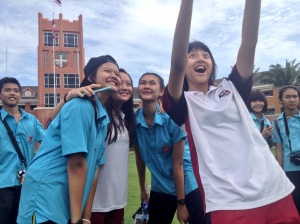 Who is teaching who?

Khun Mechai spoke at the We Walk Together conference in October 2010 and is an inspiring speaker for young people and educators.  I strongly recommend that you visit the Bamboo School in Buriram or in Jomtien (south of Pattaya), even better invite Khun Mechai into your school or workplace – you will not be disappointed.

*Khun Mechai Viravaidya is the Founder and current Chairman of the Population and Community Development Association (PDA), one of Thailand’s largest and most successful private, non-profit, development organizations. Since 1974, PDA has initiated community- based family planning services, innovative poverty reduction programs, large-scale rural development and environmental programs, as well as groundbreaking HIV/AIDS prevention activities throughout Thailand.

Mechai Viravaidya had a pivotal role in Thailand’s hugely successful family planning program, which saw one of the most rapid fertility declines in the modern era. The rate of annual population growth in Thailand declined from over 3% in 1974 to 0.6% in 2005, and the average number of children per family fell from seven to under two. Mechai Viravaidya pioneered and championed many of Thailand’s social mobilization and community development efforts that are now taken for granted. Although much of his time was spent in the NGO sector, Mechai Viravaidya has also served in the Thai government as a Senator, in 1987 and again in 1997, and as a member of the cabinet during 1985-86 and 1991-92. As a Minister to the Office of the Prime Minister for Anand Panyarachun in 1991-92, Mechai Viravaidya was the chief architect in building Thailand’s comprehensive national HIV/AIDS prevention policy and program. This initiative is widely regarded as one of the most outstanding national efforts by any country in combating HIV/AIDS. By 2004, Thailand had experienced a 90% reduction in new HIV infections. In 2005, the World Bank reported that these preventative efforts helped save 7.7 million lives throughout the country and saved the government over US$18 billion in treatment costs alone. In recognition of his efforts Mechai Viravaidya was appointed the UNAIDS Ambassador in 1999.

Apart from his involvement in the government and the NGO sectors, Mechai Viravaidya has business and corporate experience as member of the Board of Directors and Chairman of many major corporations. He also served as trustee on the Board of many Universities and international organizations. For his efforts in various development endeavours, Mechai Viravaidya has been accorded numerous awards and recognitions including: the United Nations Gold Peace Medal (1981), the Ramon Magsaysay Award for Public Service (1994), one of Asiaweek’s “20 Great Asians” (1995), the United Nations Population Award (1997), and one of TIME Magazine’s “Asian Heroes” (2006). More recently, Mechai Viravaidya has been awarded the Nikkei Asia Prize for Regional Growth (2007). Again, PDA and Mechai Viravaidya were the recipients of the Gates Award for Global Health in 2007, and are one of the Skoll Awardees for Social Entrepreneurship in 2008, both of which are awarded with a cash gift of one million US dollars.