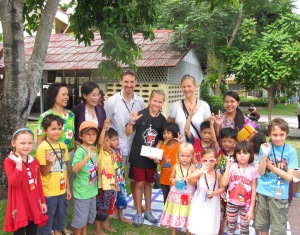 Poppy with Yok and her friends at the Deaf School in Pattaya, Thailand

Every year the 110 Round Square schools are invited to nominate a student for the Kurt Hahn Award.  This award recognizes someone that has excelled in the area of service or performed a particular brave and courageous act.  These nominations are then reviewed by a panel and if one of the students has met the criteria they are then awarded the Kurt Hahn Award at the annual international conference.  Some years the award is not even presented and every Round Square school must have a board displaying the winners over the last 50 years.  The award is named after the founder of Round Square, Kurt Hahn, who believed that education was about the growth and development of the ‘whole’ person, one of his most popular quotes is:  “there is more in you than you think.”

Poppy Mulford (a Global Catalyst winner) was nominated for the Kurt Hahn Award when she was in Year 8 for her achievements through the Global Citizenship Award and fund raising for a young Thai girl called Yok, who cannot hear.  Poppy met Yok during Round Square Week two years ago and then decided to ride her bike from Ayuthaya to Angkor Wat to help improve Yok’s hearing.  Poppy raised over 300,000 Baht and has successfully provided Yok with expert medical advice and hearing aid equipment.  You can see more on Poppy’s blog:  http://poppymulford.blogspot.com/

When Rod Fraser, the Chairman of Round Square, presented Poppy with a letter from the Executive Director of the organization informing Poppy that she had been selected from a group of seven nominations to receive the Kurt Hahn Award at the international conference in Jordan.  Mr. Fraser said:

“It was a pleasure for me to be able to congratulate Poppy Mulford on being the 2014 Kurt Hahn Prize winner.  Poppy is a young lady who exemplifies the Round Square motto ‘that there is more in you than you think’ and is a thoroughly deserving winner of this worldwide award which is not necessarily presented every year but which acknowledges an act of courage or selflessness of significant proportion.”

Poppy is now on her way to Jordan with her father, Nat, to receive the award and attend the Round Square International Conference where she will also give a 15 minute presentation to all the delegates and HM King Constantine.

Congratulations Poppy and good luck in Jordan, we very much look forward to hearing all about it when you return.