For a year or two, I have decided to change my new year’s resolutions from something behavioural (e.g. study harder) to something more tangible (run 5k without stopping). I made this change because it seems like they are more realistic goals that have more clear steps that would lead up to the attainment of it. 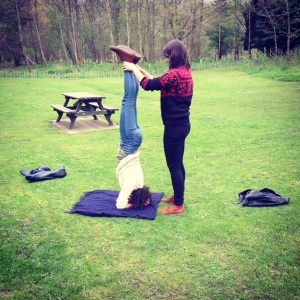 My New Year’s resolution for 2014 was actually to learn how to do a handstand without the use of a wall. For some reason, I am terrified of being upside down, so this seemed like a nice goal for this year where I would have to go out of my comfort zone to gain an interesting new experience. If you think about it, being able to do an unsupported handstand symbolises personal confidence in several manners: you have to trust your body’s ability in being strong enough to support you, and have the general confidence to eventually practice it without a wall (note to self: learn some safe exit strategies!).

After a month or so, I adjusted my goal to learn how to do a ‘head-stand’. I had seen some people do it in their yoga practices, and it seemed like the coolest thing to be able to do. When I was in Edinburgh at the beginning of May, a friend showed me what it felt like to be upside down by holding my feet so I wouldn’t fall over. I realised it isn’t as scary as I once thought, and If you haven’t tried it, I would recommend it, because it is the best energy booster I have ever come across. After a little over a month of daily practice, I managed to do an unsupported headstand. This was the best thing I did this year for boosting my self confidence and positive body image. More so, than any amount of public speaking ever could 🙂