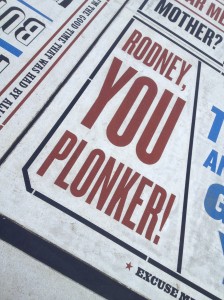 Sometimes you have no idea what you are going to find or come across.  Your preconceived impression of a place often does not do it justice.  There are gems of brilliance, beauty, imagination, innovation, quirkiness, weird and wonderful everywhere. You just have to have your eyes open and be prepared to get out and about and explore the world you live in. 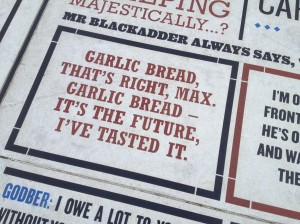 Today we ventured into Blackpool and took on the bitterly cold wind to find out a bit more about our new home and what the promenade had to offer on a Sunday in January.  It was not a democratic family decision and the sight of us defiantly picnicking in isolation next to the central pier did cause a few aggravated protests as red numb hands tried to claw crisps out of their fragile packets. 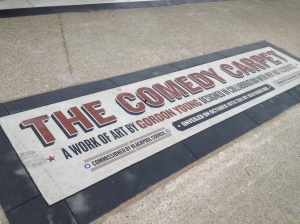 We packed up our picnic and deposited our rubbish and headed up towards the tower to get a family photo to confirm in the archives that we were here.  Glum faces trudged up the promenade in single file like a Tour de France break away group using the lead rider as a wind shield.  Surely nothing could bring a smile to their faces not even those dreaded words, “say cheese!”

How wrong can one be though, and who would have thought that for the next hour the cold wind and frozen bones would be forgotten. Suddenly, underneath our feet the promenade erupted into an impressive spread of quotes, stories, catch phrases and jokes, known as The Comedy Carpet, created by Gordon Young and commissioned by Blackpool Council.  It is a superbly well presented collection of comedy genius that encapsulates the very best of British humour. 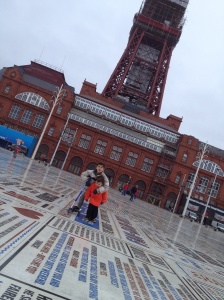 We all went off in our own directions, heads down and reading the vast array of reflections and chuckling to ourselves.  You would actually need hours to read them all and one day I will go back and start from a different angle and note new favourites, some old and some never heard before. Everyone likes jokes and loves to share them, and it wasn’t long until Jonah was tugging me over to listen to his favourite jokes that he had read inscribed on the Blackpool promenade – one being something to do with horses playing water polo!  (You can read some of Jonah’s very own jokes here.) 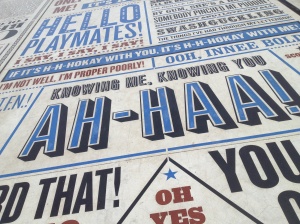 On the way home in the car it was interesting that nobody complained how cold they were or had been, instead everybody was still sharing their favourite jokes and even Zoe and Sam were trying to make up their own ones.  It is a real hidden gem and I am glad that we discovered it so early on.  The Comedy Carpet will now be a regular feature on future Crouch tours – you have be warned when you come and visit!